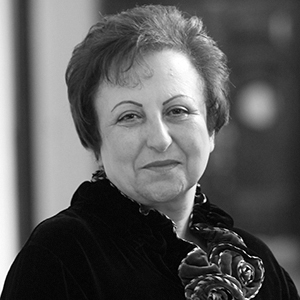 Shirin Ebadi, the first Muslim women to receive the Nobel Peace Prize, will be one of the keynote speakers within WonInspiring, at the Santander WomenNOW Summit.

Ebadi, born in the north of Iran and daughter of a law professor, has had a strong sense of justice ever since her childhood. With a law degree from the University of Tehran, she was named as a judge in 1969, being the first woman in Iran to hold this position. After the 1979 Iranian Revolution, she was dismissed and demoted to administrative work at the same court.
She is a very well-known figure due to her written criticisms against her country’s legal system and her defence in court of famous cases (she has defended notable dissidents and liberals, victims of the judiciary in her country). With an intense professional career behind her, she has worked on many cases of human rights violations, especially regarding women and children.

Ebadi is co-founder of two NGOs: the Society for Protecting the Rights of the Child and the Defenders of Human Rights Center which, according to their statutes, “provide free legal aid to those persecuted for reasons of conscious and politics”.
She is the author of over a dozen books on human rights. The publication of one of these, Iran Awakening- based on her life-, caused Ebadi to receive several death threats from certain sectors of Iranian society. Moreover, due to her open criticism of the authoritarianism and political and religious intolerance of the Ayatollah regime, she was forced to live abroad.
Her work has received widespread international recognition. In addition to receiving the Nobel Peace Prize in 2003, in 1996 she was awarded with the Human Rights Watch and in 2001 she received the Norwegian Thorolf Rafto Prize for her defence in court of Iranian women in divorce and child custody cases.